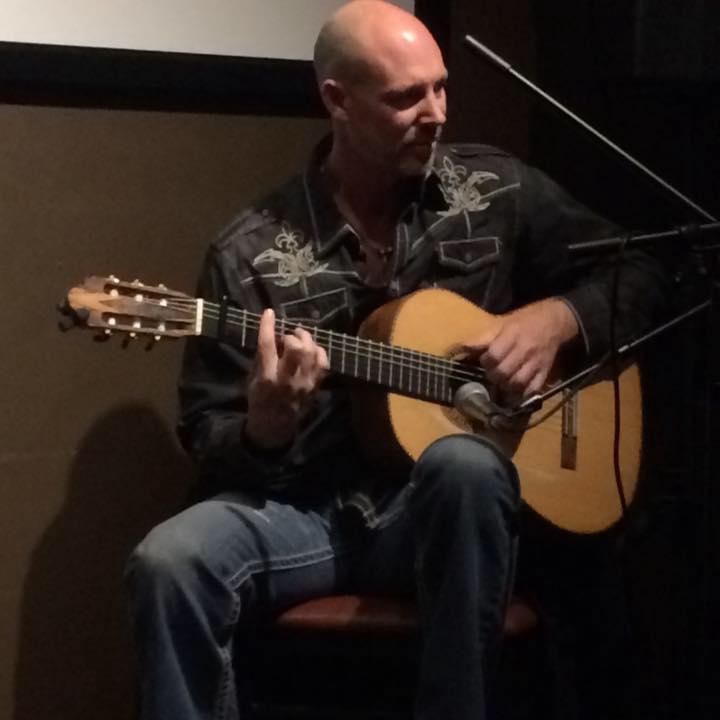 Flamenco guitarist, composer, and performer Gary Meyers didn’t grow up immersed in the exotic rhythms of Andalusia, but he intuitively taps into the Spanish spirit to perform this storied traditional music with reverence and dazzling virtuosity. The Castle Rock, Colorado-based artist’s story is how a lifelong musician who played Van Halen-style electric guitar heard a friend play flamenco, and then experienced a revelation that sent him on a transformative artistic adventure.

“Flamenco is the sister music of Northern America’s blues—both come from oppressed people. The passion of flamenco is like that of the original blues artists, and, when I first heard it, it touched my soul. There’s a lot of struggle and pain in this music, and that melds us together,” Meyers says.

Today, Gary has emerged an in-demand musician, composer, and performer with over a thousand flamenco gigs under his belt, including restaurant residencies, corporate performances, private parties, festivals, weddings, radio and television appearances, wine tastings gigs, art shows, coffee shops, benefits, and hotel performances. He playfully calls his music platform and brand, “Dirty Flamenco,” humbly acknowledging he is a Westerner playing a music near and dear to the heart of Andalusia, Spain, and beyond. Gary performs and records both time-honored, and boldly progressive flamenco styles. To date, under the Dirty Flamenco banner, Gary has released an album of traditional guitar flamenco. His upcoming album, Desperado’s Shade, is an imaginatively modern Spanish Rumba album a la Jesse Cook and Ottmar Liebert.

Dirty Flamenco appeals to fans of world music, guitar enthusiasts, talent buyers looking for elegant solo guitar and group performers, and music supervisors for film and TV placements. Gary’s sultry musicality has garnered favorable comparisons to contemporary artists such as Jesse Cook, Johannes Linstead, Gipsy Kings, Ottmar Liebert, and Sabicas. Live, Gary is an intuitive performer with a command of flamenco and rhumba traditions who eases between set melodies and improvisatory flights of fancy to heighten the entertainment experience.

For over 10 years, Gary studied flamenco with the preeminent Maestro Rene Heredia—the man credited with bringing flamenco to Colorado in the 1960s—and he also performed in Heredia’s group. Gary has the distinction of being Royal Caribbean/Celebrity Cruise Line’s first solo guitarist ever hired. He performed solo gipsy flamenco on the Celebrity Solstice throughout the Mediterranean (Spain, France, Croatia, Italy, Malta, France, Montenegro, Greece, Corsica, Portugal, Tenerife, Turkey)  where he passed muster performing this sacred music for European audiences who grew up with it. Gary has been contacted twice by America’s Got Talent for two separate private auditions. He performs regularly at various venues throughout Colorado and Arizona.

Gary started as a self-taught guitarist at the age of 14, playing rock, shred, and classical. In 2002, upon hearing a friend play a rhumba, he put the electric guitar down. “Immediately when I heard him play, I knew what I wanted to do with the rest of my life,” Gary says. He continues: “I won’t lie, I was a pretty good electric guitarist, but flamenco is a completely different technique. I had to start over, and it took many years.”

His latest album is an artistic exploration away from his traditional flamenco work, though Gary’s gipsy Spanish roots are firmly embedded in Desperado’s Shade. This album’s edgy vibe is the result of a second epiphanic moment—seeing another cruise ship entertainer playing Spanish rhumba with a looper pedal. “At first, I was like ‘you’re cheating,’” Gary recalls, chuckling. “Then I realized the layering possibilities of the pedal.”

Spanish rhumba’s 4/4 time, upbeat melodic and harmonic construct, and its infectious European flavor opens Gary’s music up to a wider audience. His use of the looper pedal has expanded his production palette, and will enrich his live performances as well.

Desperado’s Shade is a 10-song collection of Gary’s first Spanish-style original compositions, lavished with bass, percussion, and synth pads and strings for exhilarating tension and release dynamics. Throughout the album, there are a bevy of European and Spanish feels, traditional chord progressions and melodies, lyrical guitar solos and fleet-fingered flights of lead guitar, jubilant melodies, bright danceable rhythms, and sultry percussion touches. Many of Desperado’s Shade tracks exude a balmy world music feel that transports the listener to luxurious exotic beach days with a stiff drink in hand.

One of the first songs Gary wrote for the album was the title track. “Desperado’s Shade” whisks the listener away to a fantasy Western landscape with dramatic flair enhanced by smoke and clouds. Other select standouts include “Dancer’s Moon” and “Spanish River.” “Dancer’s Moon” was written during his tenure as a cruise musician. He wrote the song in his head at 3:00 AM while relaxing on the ship’s bow in the middle of the Mediterranean off the coast of Italy. His inspired melody bringing to mind a woman with long dark hair and a red flowing dress dancing with her love in the moonlight. The song’s sensually slow tempo and evocative musicality perfectly brings this steamy vision to musical life. “Andalusian Trail” oozes a mystical and centered feeling, and conjures vast landscapes of valleys with horses calmly wondering up a riverside trail as the sun goes down. The song also features a jaw-dropping outro guitar solo that’s both scene-setting and showcases Gary’s effortless instrumental prowess.

Desperado’s Shade is the culmination of years of practice and performance. It’s a next-level musical milestone that honors tradition, but also imbues an individual’s artistic spirit into world music. “This is my proudest moment,” Gary affirms. Up next, Gary will be touring, and he will be branching out through licensing his music to film, TV, and commercials where his elegantly evocative musicality would perfectly enhance the visual medium.